Other pages of sporting interests:

Fremantle's excellent seaside location would not be complete without surfing!

There are a few beaches around Fremantle where you can catch some waves. There are great surfing schools that can teach you and your children how to surf. Embrace the outdoor lifestyle!

These are the most popular spots to surf in Freo:

Rottnest also has good surf breaks. You can check out the best Surfing Locations on Rotto from the professionals: www.wannasurf.com
The best surfing spots are: 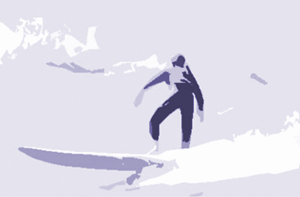 You can find the Weather, Swell, Tides, Rainfall, Sunrise, Sunset and moon phases for Fremantle at Wily Weather.

"Kite Boarding is a young and growing sport. There are quite a few different styles of kiting in Freo, the main three are Course Racing, Wave Riding and Freestyle," says Simon Wichtermann aka Swich, one of Australia's Top Kite Surfers, and Freo local.

Kitesurfing or Kiteboarding is an adventure surface water sport that has been described as combining wakeboarding, windsurfing, surfing and paragliding into one extreme sport. Kitesurfing harnesses the power of the wind to propel a rider across the water on a small surfboard or a kiteboard (similar to a wakeboard).

A kitesurfer or kiteboarder uses a board with or without foot-straps or bindings, combined with the power of a large controllable kite to propel the rider and the board across the water. [Wikipedia]

"Woodman Point (Woodies) is an awesome Freestyle spot. It’s about 20mins south of Fremantle. The best thing about woodies is it works with almost any Wind direction as you have the three beaches. Beach one (south side) beach two (middle) beach three (north side).

"If you want to be informed about the upcoming events or you are interested in competing it’s a good idea to become a member of WAKSA (Western Australian Kite Surfing Association) in fact it is a must if you want to compete for insurance reasons" advises Swich, One of Australia's Top Kite Surfers.
https://kiteboardingwa.org.au/

Kite Surfing Styles:
"Course racing: These are racing events - like a yacht race along a course, that involve both speed and tactics Secial purpose directional race boards with long fins are used. Some raceboard resemble to windsurfing boards. The goal is to outperform other kiters and come first in the race."

"Wave-riding: Wave riding (kitesurfing) in waves is a style that combines kiteboarding with surfing. Locations with a wave break are required. Most kitesurfers use a directional board (either with our without foot straps) that has enough flotation and good turning characteristics to surf the wave. Many kiters use a board that can be used for regular surfing too (with the foot straps removed). The kitesurfer follows the kite when riding the wave, so the pull of the kite is reduced. This style is popular with surfers since it resembles tow-in surfing. Some riders do it also ride waves unhooked"

"Freestyle: The kite and board are used to get big air (jumps) so that various tricks can be done while airborne. This style also used for competitive events and is free-format and "go anywhere". Smaller twintip boards and kites with good boost and hangtime are used."
http://en.wikipedia.org/wiki/Kitesurfing 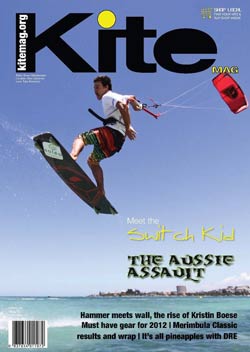 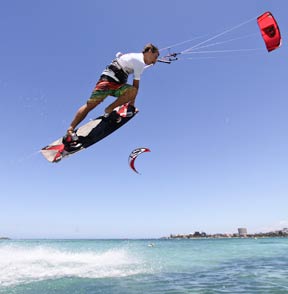 We have some of the top 10 riders in Australia in WA who kite surf around Freo. They are Daniel Anderson, Damian Gough, Ryland Blakeney, Simon Wichtermann, Chrissy Gaudieri, Shannon Ducker, Fabienne Bosiger.

Wind Direction in Fremantle:
Want to know the Wind in Fremantle? Try this great tool from Windfinder. Fremantle Wind Forecast

Seabreeze is another good side to check out the wind www.seabreeze.com.au 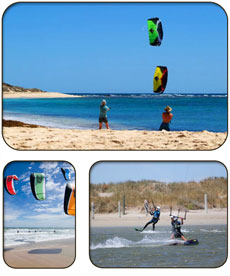 Experience what it is like to fly a powered trainer kite under the instruction and guidance of one of our trained instructors. West Oz has one of the most exclusive kiteboarding areas in the world, as the only holder of a permit to teach in the beautiful Shoalwater Marine Park. Crystal clear waters, cross shore breezes, no boats or obstacles and surrounding islands, which provide chop protected water, allows our students the ability to tap into this uncrowded location in any wind direction. West Oz Kiteboarding has been teaching since 1999 so you're in the best hands. SEASON November to March.