The Town of East Fremantle is essentially everything north of High Street (between East Street and Carrington Street) to the Swan River. 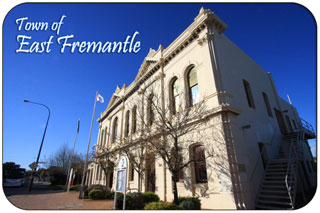 <<< Back to Fremantle's Suburbs

The Town Hall & Chambers at 135 Canning Highway was completed in the late 19th century. An amazing example of restored gold-boom style architecture.

We have a great interactive map of East Fremantle. Click here for the EAST FREMANTLE MAP

East Fremantle certainly has style, and that's no different when it comes to it's Restaurants and Eateries. Top class cuisine and the fabulous East Fremantle backdrop offers the best of both worlds!

East Fremantle on the Swan River

Interactive Map of East Fremantle
use the icons to zoom and look around...


View this East Fremantle Map in a larger map on Google

East Fremantle borders the Swan River, the heart of the Swan Valley

"The Swan River estuary flows through the city of Perth, in the south west of Western Australia. Its lower reaches are relatively wide and deep, with few constrictions, while the upper reaches are usually quite narrow and shallow. The Swan River drains the Avon and coastal plain catchments, which have a total area of about 121,000 km2. It has three major tributaries, the Avon River, Canning River and Helena River.

The latter two have dams (Canning Dam and Mundaring Weir) which provide a sizeable part of the potable water requirements for Perth and the regions surrounding. The Avon River contributes the majority of the freshwater flow. The climate of the catchment is Mediterranean, with mild wet winters, hot dry summers, and the associated highly seasonal rainfall and flow regime.

The Avon rises near Yealering, 100 km southeast of Perth: it meanders north-northwest to Toodyay about 90 km northeast of Perth, then turns southwest in Walyunga National Park - at the confluence of the Wooroloo Brook, it becomes the Swan River. The Canning River rises not far from North Bannister, 100 km southeast of Perth and joins the Swan at Applecross, opening into Melville Water. The river then narrows into Blackwall Reach, a narrow and deep stretch leading the river through Fremantle Harbour to the sea.

The Noongar believe that the Darling Scarp is said to represent the body of a Wagyl - a snakelike being from Dreamtime that meandered over the land creating rivers, waterways and lakes. It is thought that the Waugal created the Swan River. The estuary is subject to a microtidal regime, with a maximum tidal amplitude of about one metre, although water levels are also subject to barometric pressure fluctuations.

There are currently fifteen yacht clubs along the Swan River, with most on Melville Water, Freshwater Bay and Matilda Bay. Royal Perth Yacht Club, on Pelican Point in Matilda Bay, staged the unsuccessful 1987 America's Cup defense, the first time in 132 years it had been held outside of the United States. RPYC and the Royal Freshwater Bay Yacht Club are the only two clubs to be granted a royal charter. There are also many anchorages and marinas along the lower reaches near Fremantle."